Dingle native, David Geaney, a 5 X World Champion Dancer, is taking the world by storm. After an illustrious competitive career, amassing numerous major titles including All Ireland, European, All Scotland and Great Britain Championships alongside his five world titles, he has now set his sights on choreographing and performing around the world which has seen him perform already in Belgium, Prague, the United Kingdom, Sweden, France, Denmark, Spain, Germany, Canada and the United States.

In 2011, David’s dancing started moving away from the strict competitive style to a performance style when he took part in and won TG4’s An Jig Gig. In the same year he was a top 10 finalist in the Ernst and Young, Young Entrepreneur Programme, with performance dancing being his business idea. In 2012, he went on to win Kerry’s Got Talent, pitting his talents against dancers, singers and musicians alike with a prize fund of €5,000.

David performs regularly in his family’s bar, The Dingle Pub, in Dingle, County Kerry dancing with live musicians and entertaining tourists from all around the globe since he was 14! It is here that he established his strong connection with live music, free styling his steps to match the beat of the music.... which isn’t easy! David regularly works in the family pub, surprising tourists by taking the floor after answering their “when is the dancer” queries & serving them their delicious dinner just moments before! 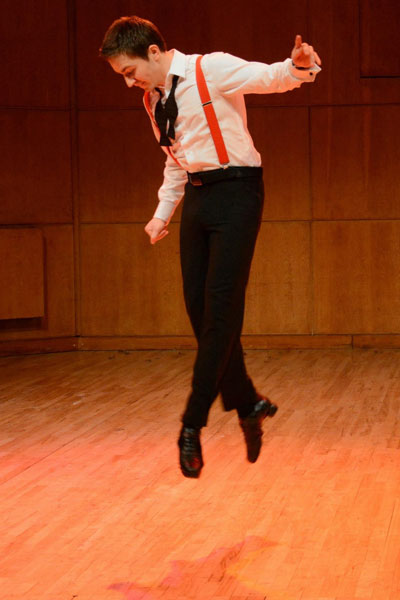 At 16 years of age David joined Celtic Steps The Show, dancing to audiences from all over the globe in the INEC arena, as the lead male dancer. One of his highlights of his time in the show was performing at the World Surfing Championships in October of 2015. He has also performed with the hit show Trad on the Prom at the Volvo Ocean Race on its stopover in Galway city, as well as travelling to Denmark with the show the past few years to perform sell out shows in Copenhagen. David also performed with Cork-based show, Pulses of Tradition on St Patrick’s Day in 2013, which was live streamed to over 2 million people in San Francisco. He has since travelled with the show to Edinburgh performing to sell out crowds in Edinburgh’s Assembly Rooms theatre’s where he was dubbed ‘the best dancer we have ever seen’.

David continued to lead Celtic Steps The Show up until 2017 when he decided to set up his own brand new production, Velocity, which he debuted at the Edinburgh Fringe Festival in August 2017. The show was seen by thousands of people, with some dubbing it “the best show we have ever seen at the fringe” and receiving several 5 star reviews from national press, with The Scotsman claiming it to be the “dance hour of the Fringe”! Broadway, New York followed with David debuting his show at The New Victory Theater on 42nd Street, just off Times Square! After a hugely successful run, David is now planning on bringing his production, whom he set up with James Devine, the world record holder for the fastest feet in the world, out on the road in 2020 bringing it to the US, Canada, the UK and some parts of Europe. Be sure to follow David across all social media pages to keep an eye out for when he will be in a city near you!!

In 2017, David was approached by the producers of the world famous talent show, “Britain’s Got Talent”, to see if he was interested in taking part in the competition! Despite the intense pressure of his final year exams, David decided to come up with a new and exciting concept to try out on the show using LED screens and complex programming! David’s performance was widely applauded with Simon Cowell acknowledging that he was “onto something” calling him “an ideas man”! After reaching the live semi finals, 3 days after his final exam, David produced a spectacular performance in the semi final in front of millions of viewers on live television! David now says that he wants to take “these unfinished ideas” and “take them to back where I originally imagined them in my head!” His clear passion for technology and performance will no doubt produce an incredible spectacle that will be witnessed around the globe!

In 2015, David also decided to set up a traditional Irish music and dance act called “Officially Tapped” with some of his friends. The lads have since gone on to perform regularly at weddings and functions, whilst headlining Fleadh Cheoil gig rigs around the country.

David has also made a number of guest appearances for major acts including world renowned The Chieftains, The Kilfenora Ceili Band, Aslan, The Dartry Ceili Band and none other than world famous Sharon Shannon. David has performed regularly with Sharon on her trips to Kerry, whom she recently dubbed ‘The present day Fred Astaire’ and ‘A national treasure!’. David now tours regularly with the world renowned Joanie Madden and Cherish The Ladies on their US and Irish tours! Make sure and check his tour dates to see when you can catch this grammy winning show!

With his talents well recognized at this stage, and with Riverdance and the likes an option, David decided to remain at home to finish his degree in the University of Limerick studying Economics and Mathematical Sciences where he graduated in 2017. With his degree in his back pocket and an unyielding desire to produce spectacular material to showcase to audiences around the world, the young Kerry man won’t be falling back on the math & economics problems just yet!! 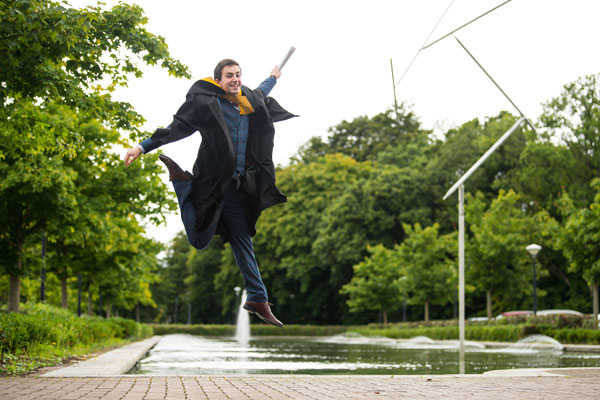 In 2017 when he decided to set up his own brand new production, Velocity, which he debuted at the Edinburgh Fringe Festival in August 2017. The show was dubbed “the best show we have ever seen at the fringe” and received several 5 star reviews from national press. Broadway, New York followed with David debuting his show at The New Victory Theater on 42nd Street, just off Times Square! The show was sold out for its entire run with several newspapers including The New York Times , The New Yorker and the world renowned Playbill had glorious reviews for the show saying "The unstoppable duo—and guests AnneMarie Keaney and Gabriella Wood—dance at breakneck speed for 75 minutes in this explosive production showcasing the past, present, and future of Irish Dance. Backed by a live funk-pop-Celtic band and DJ, the show is a rock concert meets jam session meets epic choreographic feet!" After a hugely successful run, David is now planning on bringing his production, whom he set up with James Devine, the world record holder for the fastest feet in the world, out on the road in 2020 bringing it to the US, Canada, the UK and some parts of Europe. Be sure to follow David across all social media pages to keep an eye out for when he will be in a city near you!!

Check out Velocity The Show on facebook to read more details on their amazing cast!

We use cookies to ensure that we give you the best experience on our website. If you continue to use this site we will assume that you are happy with it.OkNoRead more